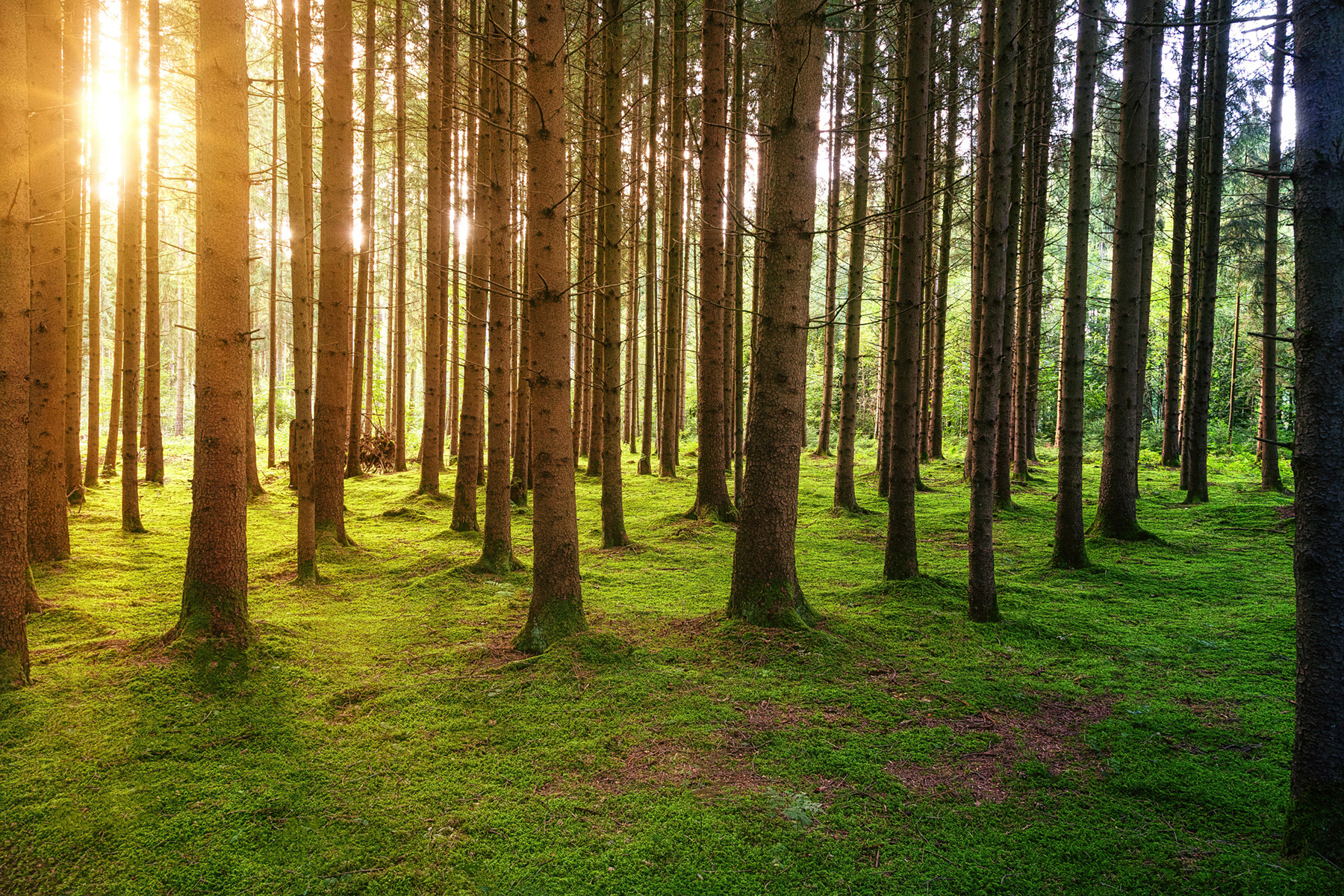 Understanding the land use challenge

Better Growth, Better Climate defined the land use challenge as a holistic one involving people and their search for livelihoods, agriculture, forests and fresh water. Although each of these topics typically tends to be discussed in isolation, they create an interacting whole together. Rising demands for agricultural and forest products are propelled by billions of consumers, many of them only now emerging from poverty. The result of this and hundreds of millions of production responses has been massive degradation of the world’s natural, agricultural and forest resources. Better Growth, Better Climate argued that the only way to deal effectively with this situation at scale was through a “produce and protect” approach. This would aim both to increase the resource efficiency of expanding agricultural and forest product production, and protect high-carbon forest and clean-water resources. It acknowledges that those who can reap the benefit from using land to produce more are not always those who bear the costs of degradation. The stylized facts examined in Better Growth, Better Climate are laid out in Figure 1, along with the main recommendations for action. 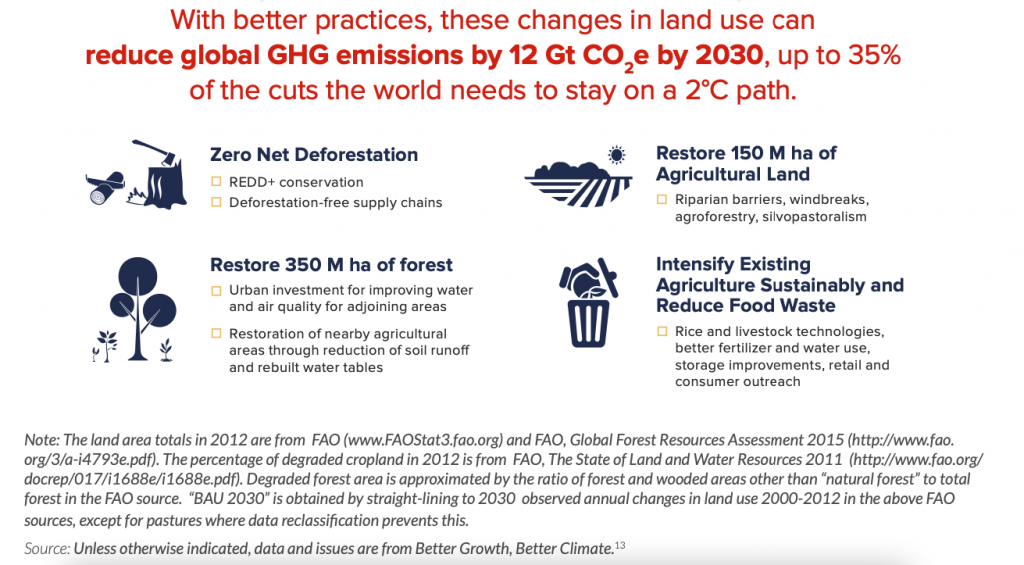 One-third to half of the world’s agricultural land was in a degraded state in 2010, and a quarter was severely degraded.
Even as pressure grows to boost agricultural production, another 12 million ha are lost each year due to poor soil and water management and other unsustainable farming practices.15 The United Nations estimates that degradation of agricultural landscapes cost US$40 billion worldwide in 2014, not counting the hidden costs of increased fertiliser use and the loss of biodiversity and of unique landscapes.16 In some regions, there is little land left that is suitable for agricultural expansion. Water is a particular concern: the United Nations projects that half the global population will be living in areas of high water stress by 2030.17 Climate change will further exacerbate these challenges.

In many developing countries, land degradation is often exacerbated by expansion onto fragile hillsides and wetlands under population pressure.19 Resource mining tends to worsen as poor people on the land farm ever smaller parcels, barely large enough to subsist.20 Risks are also increased by excess removal of trees and shrubs in the landscape for fuel and feed. In other places, inadequacies of land tenure and governance have allowed destructive short-term timber, pulp or palm oil production to leave large areas of severely degraded lands behind, including high-carbon peatlands in Southeast Asia.21 Also common is for both poor smallholders and large agribusinesses to clear forest and bush to access land for livestock, feed and other food production, particularly where alternatives for accessing land or intensifying production are either scarce or prohibitively expensive. Clearing tropical forest for cattle ranching has been a particular problem over time in Latin America.

There are thus a wide variety of degraded lands, from drained peatlands in Southeast Asia and saline irrigated lands in South Asia, to eroded hillsides in Africa and leached tropical soils from cleared forests in South America. Soils on all these lands have typically lost organic material and other nutrients, leading to losses in structure, water retention capacity and fertility; in some cases, they have become more saline or acidic.24 As land is degraded, pressure is inevitably increased on surrounding forests.

Gross tree cover declined by 18 million ha globally in 2013 alone, based on remote sensing data.25 How much of this is due to deforestation in the sense of clearing the land of trees and then converting it to some other use such as agriculture is not clear. The current estimate of gross annual deforestation from Food and Agriculture Organization (FAO) over the 2010–2015 period from country reporting is 7.6 million ha, somewhat offset by an annual gain in forest area of 4.3 million ha, often in different regions, for a net global forest area loss of 3.3 million ha.26

Looking backwards, the link to agricultural expansion is clear: the global agricultural land area, including permanent pastures, grew by about 10%, or 477 million ha, in the 50 years up to 2013,27 expanding into savannahs, prairies and forests. Although
the boreal regions accounted for most gross deforestation (due to increased wood removals and fires in recent years), most of the net deforestation (in the sense of land use change) in 2000–2012 occurred in the tropics, with commercial agriculture responsible for 71% of tropical deforestation, much of it illegal.28 Wood and pulp production and, in some places, mining have also played a role.29 Data collected by governments show an annual average of 13 million ha of forest were converted to other uses in 2001–2010.30 Although in that same period, an average of roughly 8 million ha of non-forest area was allowed to regenerate into forest each year, reducing net deforestation, they are not truly interchangeable.31 Thus the 2010–2015 data on net deforestation from country reporting cited above may indicate that net deforestation is decreasing, although uncertainties remain as to why gross tree cover loss from remote sensing is so much higher than estimated deforestation from country reporting. It is not at all clear that degradation of forest landscapes is decreasing; the remote sensing data seems consistent with the view that if anything it is increasing.32

In many cases, natural forests are replaced with plantations; existing forests also continue to be degraded by repeated tree removals.33 From 1990 to 2010, tropical forests lost carbon storage equivalent to 15% of global GHG emissions.34 This has significant implications for the climate, as in 2009, forests absorbed about half as much climate pollution as was emitted from fossil fuel consumption.35 The combined GHG impact of forest and agricultural land degradation is estimated at 6.2 Gt CO e

GHG emissions and lost carbon sequestration are not the only ways in which deforestation affects climate outcomes and the environment. Vital ecosystem services such as water and air purification, flood control, rainfall regulation, landslide prevention and biodiversity are also at stake. About 4 billion ha of forests remain around the world,38 and the value of the ecosystem services they provide has been estimated at US$3,100–6,120 per ha. This means gross deforestation could be costing the global economy US$40–80 billion each year.39 Forests also generate many direct economic benefits, at least US$1 trillion per year from products such as timber, pulp, fuel and food, and services such as forest-based recreation.40 More than 13 million people are directly employed by the forest sector, and another 41 million work informally in it. Some 840 million people, or 12% of the world’s population, collect fuelwood and make charcoal for their own use.

In this context, it is important to note how central forests and farmland are to the poor. Although the share of people living in extreme poverty has been cut in half since 1990, to 21%,42 more than 1.2 billion people still lived on less than US$1.25 (2005$) in 2010, and more than 840 million regularly went hungry in 2012.43 Rural areas are home to a disproportionate share of these people. About 350 million people live in forest areas, and 60 million indigenous people almost wholly depend on them for their livelihoods.44 In low-income countries, 70% of the population is in rural areas,45 mostly relying on agriculture for food and income. Forest, soil and water degradation all directly affect them. To the extent that they affect food availability and prices, they are also of serious concern to poor people who need to purchase their food, especially in South Asia and sub-Saharan Africa, where 40–70% of household budgets are spent on food.46

Human-caused degradation of whole landscapes today is mainly a challenge in developing countries,47 and any land use policy or investment intervention in developing countries is likely to affect poor people’s livelihoods.Low-income farmers in these countries have limited access to education, cash and credit, which makes it difficult to adapt to changing conditions. Governments themselves often lack the resources to stop degradation, much less to restore land. Working together with development partners, they need to find solutions that boost the productivity and resilience not only of the land but also of the people who depend on it.

Finally, it is vital to recognise that the problems of agricultural land and forest degradation are closely interlinked. This means they must be addressed cooperatively to achieve synergies and avoid conflicts. For example, boosting agricultural productivity could lead to increased deforestation on adjoining lands if protection of forests is not simultaneously enforced. Similarly, forest protection in one area could lead communities or agribusinesses to cut down another forested area to grow food for consumption or for export markets. Yet, as we discuss further below, there are many approaches, such as agroforestry, that can add tree cover while also boosting food production. A coordinated, integrated national approach to landscape management is needed, which aims simultaneously to address resource conservation and restoration, boost the productivity of land and promote rural economic development and poverty reduction.